You are here: Home / Diaries / A German Horse Barding circa 1537

Made for Kingdom of the West, A&S Competition 2005

In June of 2005 my local SCA group was challenged by another local group to compete in the 8 category team competition in the annual arts and sciences event. One of the competitions was for horse barding. That’s all the direction we had to go on.

I decided to stick with what I know, 16th century German. Before I chose a design to recreate, I first conducted an art survey of all four volumes of The German Single-Leaf Woodcut: 1500-1550 as well as several other art books in my possession, resulting in 100+ separate instances of horse barding.

In conducting this survey, I discovered that only horses in jousting tournaments wore the type of barding commonly seen in the SCA, the cloth horse blanket type. Horses that were not in tournaments wore horse barding made of intersecting straps or ropes, sometimes with bells. I have chosen one specific instance in the artwork to recreate.

A drummer from The Triumphal Procession of Emperor Charles V, by Hans Schaufelein. p. 1031 in The German Single-Leaf Woodcut: 1500-1550 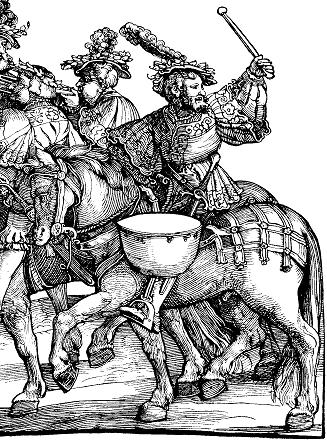 Interpretation of the drawing

The horse’s owner had several requests:

Several small changes were made to the design, the vertical strips in the barding were made longer, and the strap under the tail was removed. These changes were based on this picture of François I on horse back by François Clouet the younger in the Galería de los Uffizi. Florencia. Italia. Click on the picture to go to the larger detail image at www.aut.org. 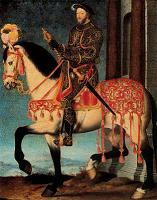 In the art survey that I conducted there were a variety of materials depicted. Some barding were obviously made from leather, others from cords, and some could have been either leather or fabric. The horse barding of Francois I shown above appears from the painting to be made from red velvet. I have chosen to recreate this horse barding in fabric as that is the medium I know best, and I already had the materials in my stash.

The fabrics used in this horse barding are navy blue worsted wool, red linen lining and a tan linen interlining.

The ties are red cotton yarn fingerloop braided using pattern #3, An open lace of V bowes, c. 1475; 2 Strings at once, c 1630, Compleat Anachronist #108. There are 40 brass bells, each wired to their own plastic button.

In period, indigo or woad would have been used to achieve the navy blue color of the wool. For the red linen and cotton, they would have used madder, the interlining would have been left in its natural color. The bells are the same round design of bells seen on the original horse barding.

To create this horse barding, I first measured the horse and the saddle. Using those measurements, I made a mockup using strips of cloth safety pinned together with cotton string for the ties to the saddle. This was tried on the horse and adjusted. Then the horse was ridden around the arena at different gaits to see if it would slip off or if there were any difficulties with the design. Several adjustments were made and then the mockup was removed.

Once I was home, I carefully measured and made a diagram of the mockup so if any of the safety pins got accidentally removed I would have a record of what the measurement should be.

In theory, cutting your lining larger than your outer fabric to get a nice little piping effect on the edges is easy to do, and in short test pieces it turns out fine. But for longer pieces it’s a nightmare! The outer fabric wanted to pull away from the pins on the second seam to close up the tube, and all the layers kept slipping apart, even though I had plenty of pins holding it together.

To enable easy washing, the bells are detachable. Each bell is wired to a regular button and buttons onto the horse barding. I experimented with using sewing thread to attach the bells to the buttons, but the bells cut through the thread. So I switched to 24 gauge brass wire to attach the bells to the buttons. I have no documentation that this is a period method of attaching bells to horse barding, but it uses equipment and methods that were available at the time, and the bells aren’t going to cut through several strands of wire easily.

Once all the pieces were sewn, turned inside out and top stitched, they were pinned together using safety pins and tried on the horse for a last fitting. Small adjustments were made and it was ready for final assembly. 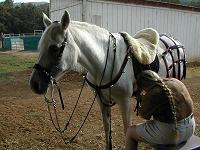 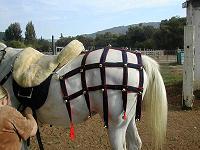 If I did this again…

If I made horse barding again, I would not do the piping by making the lining larger than the outer fabric. It was such a pain to get the piping on the edges to show the right amount, and ironing was quite the nightmare. Also, I would probably not make it out of fabric, leather would probably be my first choice, no endless tubes of fabric to turn inside out!

On the other hand, I learned a great deal on this project about horses and fully enjoyed the experience.

There were several entries into the horse barding competition, and I didn’t win because I forgot to put in the documentation the section explaining why I didn’t put the strap under the tail. But, the horse’s owner LOVED it! And the horse enjoyed the sound of the bells. Really, those two are the best judges of all. 🙂

If you have any questions or comments, email me at m_mc_nealy AT yahoo DOT com

Previous Post: « A Korset/Mieder – The first one
Next Post: A Schlappe in the Military or Landsknecht style »