You are here: Home / Resources / Timeline of Events and Fashions in the Germanic Lands 15th and 16th centuries

I have tried to present a timeline of historical events and fashions from the same period. Some of these are standalone pictures while others are links to more in depth resources.

1473 – Fredrick III tries to arrange a match between his son Maximilian and Charles the Bold, Duke of Burgundy’s daughter, Marie. Charles asks for too high a price for his daughter and the match is called off at the last moment.

1476 – Charles agrees to betroth his daughter Marie to Maximilian. 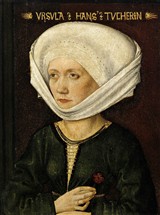 1482 – Marie dies after a fall during a hunting trip, she leaves two children, Philip and Margaret. 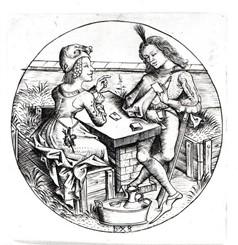 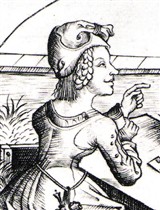 1494 – Maximilian marries Bianca Maria Sforza, daughter of the Duke of Milan, mainly for her money, but its shortly all spent as she wastes it and Max goes to war.

1506 – Philip dies after a hot summer’s day. He leaves 6 children, Charles, Eleanor, Ysabeau, Mary, Catherina, Ferdinand. Charles will later become Charles V of Spain and HRE. Ferdinand will become King of Bohemia and Hungary, Archduke of Austria and HRE after Charles. These two children of Philip start the east and west branches of the Hapsburg family.

1508 – Maximilian elected HRE, over the King of France, Frances I. He borrows heavily from the Fuggers to make it happen.

1516 – Maximilian makes peace with Frances I of France and abandons German possessions in Italy.

Signboard for a Schoolmaster, 1516, Hans Holbein the Younger

Signboard for a Schoolmaster, 1516, Ambrosius Holbein

1517, Oct 31 – Luther posts his 95 theses on the door of the Wittenberg chapel door on the day of the largest number of visits to the chapel, and after Fredrick the Wise, Elector of Saxony has left town. He also sends copies to the Archbishop of Mainz and the Bishop of Brandenburg. Unbeknownst to him, the Archbishop received 50 percent of his income from the sale of indulgences.

1524 to 1526 – German Peasant’s War. A serious of regional rebellions rather than an all out war, sparked by religious reformation and oppression by the landlords.

Die Augsburger Monatsbilder
A set of 4 murals from Augsburg, Germany painted 1520-1525. There is a mural for each season, and each mural depicts three months out of the year, depicting activities done in each month. These murals give a glimpse of the clothing and hats worn by a wide spectrum of social classes in Augsburg. Winter,Spring,Summer, Fall

1529 – Treaty of Cambrai signed. France renounced his claim on Upper Navarra, Naples and Milan, but retained the Duchy of Burgundy. France and the Hapsburgs would continue to have wars and treaties, with France being the one to break them, over the next century.

1530 – Augsburg Confession presented to Charles V at the diet of Augsburg.

1531 – Schmalkaldic League formed. A league of Protestant Princes in the Holy Roman Empire, they confiscated Church land, expelled bishops and Catholic Princes and worked to spread Lutheranism throughout northern Germany.

An illustrated manuscript of the Wernberger line of famile Notthafft from 1531. Nice pictures of clothing and heraldry. Click on either the “Große Darstellung (langsam)” link or the “Kleine Darstellung (schneller)” link to access the manuscript 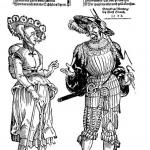 1547 – Schmalkaldic League defeated at the battle of Battle of Mühlberg. However this was not the end of the league. It reformed and continued to give Charles trouble.

Details the location of the principalities and cities of the Holy Roman Empire in 1547.

1552 – Truce of Passau. The Schmalkaldic League unsuccessfully laid siege to Frankfurt and sacked several neighboring towns. The Emperor gave in and agreed to the truce. This lead to the peace of Augsburg.

1555 – Peace of Augsburg signed by Emperor Charles V and the forces of the Schmalkaldic League. The effect of the treaty was to officially recognize that there were Lutherans in the Holy Roman Empire, unfortunately it did not protect other types of Protestants. This treaty lead to the policy of “cuius regio, eius religio” (“he who rules, his religion”, or “in the Prince’s land, the Prince’s religion”), which established Protestant districts and Catholic districts depending on the religion of the ruler. During a grace period, families could move to a district that practiced their religion and settle without financial consequence. But after the grace period, no other religion would be allowed in the district except the official one of the state.

1556 – Charles V, weary with constant fighting with France and with the German protestants abdicates as HRE. Ferdinand, his brother, is elected.

There are a series of internal feuds between princes or archbishops in Germany, but the major conflicts take place in other places. Spain becomes occupied with England and the revolt of the Netherlands. France has its own internal troubles with the Huguenots. Germany settles down to a brief period of relative peace, until the 30 years war starts up in 1647.

Previous Post: « Introduction to 16th century German Costuming
Next Post: Good Ale, Food, Friends…..And a chance to get out of Purgatory Religious Guilds in Medieval England »