You are here: Home / Diaries / Knitted Man’s Hat from the Ship “Gagiana”

Knitting pattern for this project can be found here: Recreating the Gagiana Barett – Knitting Pattern For a Barrett or Flat Cap

On October 14th, 1583, the merchant ship “Gagiana”, while carrying a load of goods from Venice to the East, hit a reef and sank off the Adriatic coast, near the island of Gnalic and what is now known as Croatia. The wreck lay undisturbed for more than 350 years, until it was rediscovered and the remains of the cargo were recovered by divers in 1967-1968.

Part of the cargo that was recovered from the sea was this iron clad wooden chest, which contained 3 men’s linen shirts, 54 meters of silk damask, and 8 men’s knitted hats. Several years later, these items were sent to the Abegg Foundation for conservation (Flury-Lemberg, M.) 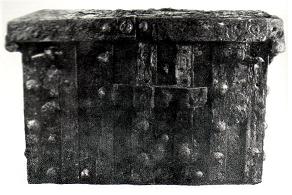 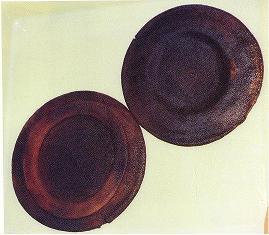 While they were undergoing conservation, a detailed description of their measurements and construction was completed. They were found to be made out of wool that had been knitted and then fulled. The original color is not specified, but appears from the picture to have been a dark brown or black. 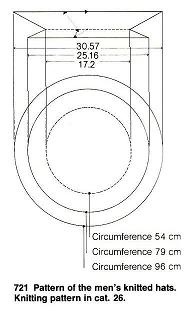 Knit I and III together.

Now again decreased in each 5th row, started at each 10th stitch, then each 9th, etc., etc., until no stitches were left (V)

In the business records of Bartholomaeus Hartpronner, who imported Italian goods into Augsburg in the 1530-1550’s, it is recorded that he imported from Italy baretts of the following colors: black, red, ash-colored, liver-colored and white.(Zander-Seidel, J)

This lady, painted by Hans Memling, Germany 1539, is wearing what I believe to be a barett. As the hats from the “Gagiana” look very similar to this image of a flat, floppy, fuzzy hat, I think that they are baretts. 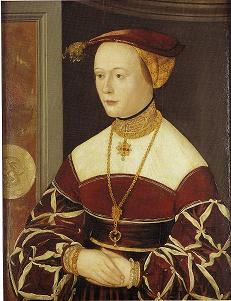 My Reconstruction of the Hat

In examining the description of the hat, I was able to determine that the finished gauge of the knitting was 2sts = 1cm, 3 rows = 1cm.

I chose a liver-colored 4-ply worsted wool, brand name Cascade 220, for the yarn as I didn’t have access to hand spun yarn that was the right size to reach the required gauge. As the hats are knitted in the round, without any seams, I used size 5, 7″ long wooden double pointed knitting needles.

To knit the hat, I followed the description exactly, until I reached the end and had a very funny looking hat! The description says to continue decreasing until there are no more stitches, but I found that if one did this, one ended up with a pointy topped hat. In closely examining the picture, it does not appear that this was done in the original extant hat. So I am presuming that the person doing the conservation work got tired of counting stitches and rows, thus the “etc., etc.” at the end.

I used my experience with knitting modern tams, and finished it this way: after the row in which I knitted two together at every 3rd stitch, I knitted one row; next row, knit two together, knit one, to end of row. I did this three times, after doing this I knitted one row and then pulled the yarn through the remaining stitches to finish off the knitting.

I then washed the finished barett in hot water and blocked it to its finished shape. It fulled a little in the washing process but probably not as much as the original. As we have no way of knowing what the original gauge before fulling was of the original, I just made my gauge slightly larger than the finished gauge I wanted to allow for shrinkage. 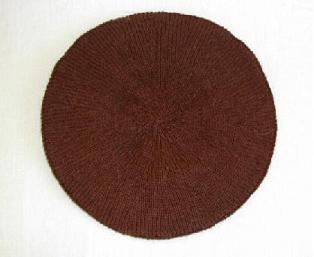 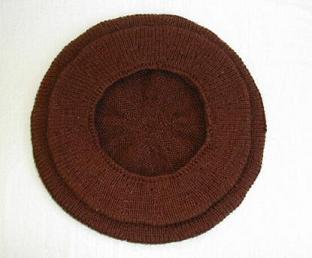 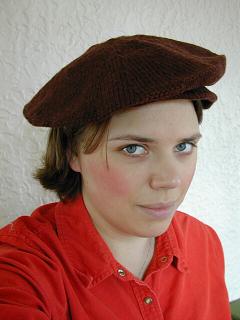 Flury-Lemberg, Mechthild. Textile conservation and research : a documentation of the textile department on the occasion of the twentieth anniversary of the Abegg Foundation. Bern : Abegg-Stiftung Bern, 1988.

Previous Post: « Recreating the Gagiana Barett – Knitting Pattern For a Barrett or Flat Cap
Next Post: Three Different Kinds of Lebkuchen from the Cookbook of Sabina Welserin, Augsburg, 1553 »