You are here: Home / Diaries / A Korset/Mieder – The first one

After looking at lots of images from the range of 1560-1590, one of the biggest things that struck me in looking through a lot of images is how smoothly and well fit all the bodices were in front and back, and how flat yet uplifted their bust lines were. But while the bust lines were flat, there was not an excess amount of cleavage over flowing the tops of the dresses, in fact, very little cleavage shows because a woman in the German lands during this period is usually covered up to her lower jaw. There are of course exceptions to this smooth fit and maximum coverage, but that’s not the look I am going for, I am a respectable merchants wife.

After considering the issue, and taking a good look at me, and all my lumps, in the mirror, I decided that I needed a foundation layer to smooth out the lumps in the back and tummy and support the bust. I also decided that building the support into the bodice of the gown was not the way I was going to go for a couple of reasons. I wanted a layer that could be made, fitted well and finished once and re-worn. If I built it into the dress, for the next dress I would have to do the same thing and so on, thus creating a lot of re-work and potentially inconsistent fitting results from dress to dress. This will probably happen anyway due to life, drafting issues and mental blocks, but I want to keep the variables down to a minimum. So from an efficiency and cost standpoint, it makes the most sense to build once and use many. It also needed to be front lacing, as I am going to be putting this on by myself and I have enough trouble zipping dresses up the back, let alone maneuvering a little cord in and out of holes.

I used a combination of sources to draft the patter, a combination of Drea’s Corset pattern generator, The Renaissance Tailor’s German corset drafting instructions, located here, and studying the German corset in Janet Arnold’s Patterns of Fashion 1550-1620 for clues to how deep and wide the neckline should be, how wide and long the shoulder straps, and all those other small details.

I drafted the pattern with a 2” compression on both bust and waist and I liked the bottom edge curves from Drea’s pattern so I added that in too. The shoulder straps I made as part of the back, they come up over the shoulder and are firmly sewn to tabs on the front side of the corset. I did this for a couple of reasons, for starters I couldn’t figure out how long they needed to be and since I was home alone doing the fitting on this, I figured it would be easier to fit the shoulder straps this way so that they wouldn’t be slipping off or not tight enough, also, I really hate extra bulk on top of the shoulders. Finally, I added seam allowance to the side seams and left everything else without as I was going to use seam binding to finish the edges.

For the boning, I decided to use hemp cord. I realize that in some circles this is controversial, but here’s why I used it. Easy to put in, Cheap (I think I paid 2.50 at the drugstore for a roll, enough to do the whole thing), Flexible (gotta love that ability to bend over) , Actually did exist in period (Steel boning didn’t), Non poky and doesn’t bite into my hips and waist. If you want more info on hemp cord boning, see Here.

For the fabric I used a old creamy white heavy weight cotton curtain from IKEA that I had just lying around. I figured if I mess up, nothing lost and knowledge gained, and if I don’t mess up and it turns out great, it’s a sturdy enough fabric to take the strain of wearing.

I sewed the fronts to the back for the outside and the inside, which were made of the same fabric, then I pressed the seams flat and trimmed them. I tried on one of the layers at this point, pulling the edges together to make sure that there was some possibility of them meeting, they did, so I laid the outside and the inside wrong sides together, and matched up the back seams and the edges all around, then I pinned it so it would stay.

I tested out on a scrap of the fabric different channel widths, using my sewing machine foot as a guide. Then I ran a double strand of cord through as a test. I wanted a channel that held the cord firmly, wasn’t too loose, yet I still had to be able to get it through. Once I knew what width I wanted, I ran one line of stitching down each side of the front, ¼ inch away from the edge to hold the layers together, then I ran a line down the middle of the back. In order to keep the layers from shifting during the channel sewing process I kept some pins in around the edges and the middle to minimize shift.

On each of the fronts, I ran one channel, then had a ¾ inch space for the lacing holes, then started the main section of channels. I sewed channels straight from top to bottom from the front edge to the side seam. For the back, I sewed 7 channels centered on the middle of the back, and then following the angle of the back side seam, sewed 3 channels starting ½ -1“ away from the side seam.

Here is a picture of the corset sewn together, with the channels sewn but no cord in yet.

Then I again tried it on in front of the mirror, it still looked good and was already pretty supportive. Using a tool I created out of a long piece of Florist wire, I ran a double strand of cord through the channels. When it was completed, I again tried it on, the fabric really hadn’t shrunk, which surprised me. I then sewed a line of stitching on the top and bottom edges, ½ in, to lock in the cord. I trimmed the cord even with the fabric and marked the lacing holes down the front. I had never done hand bound lacing holes before, but they were very easy to do. Next time I will use the washers or rings to make them round and neat because mine came out more almond shaped.

With the holes all completed, it was time to lace it up for the first time and fit the straps to the right length. It took a bit to get the hang of the lacing, but it went pretty smoothly, and looked quite nice when done. Had a bit of an acrobatic maneuver getting the shoulder strap from the back to the front since I couldn’t reach it. Finally I just unlaced, grabbed them and flipped them over to the front and re-laced. I like tight shoulder straps, the last thing I wanted was the renaissance equivalent of slipping bra straps, which seems to be the bane of my existence. So I adjusted the corset so it was sitting high and supporting in all the right places, then I yanked the strap tight across my shoulders so that there were no wrinkles in the upper back. Then I pinned the strap to the tab on the front, repeated on the other side. Then just to make sure that it was still going to fit ok, I put on a button up shirt and wore it around the house, jumped up and down, bent side to side. Sure enough, the straps were now too loose and were slipping off, so I re-tightened them and did the same thing. The straps stayed put and my shoulders felt fine.

marked the spot where the end of the tab on the shoulder strap with a pencil (my favorite marking tool on light colored fabrics, doesn’t rub out but comes out in the wash), and then took the corset off. Made sure both straps were similar in length and cut off the extra.

Next, I bound the edges with red seam binding, one side was sewn by machine, the other by hand. I had to change to a new, very sharp, needle to complete the sewing and it was still hard on the fingers. I then overcasted the shoulder straps to the tabs by hand, went over the join about 3 times. 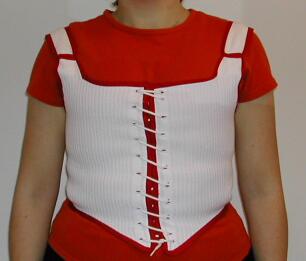 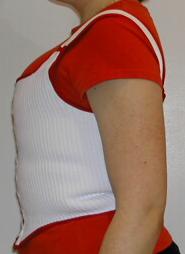 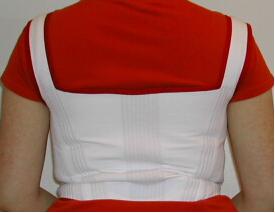 But what’s this!?! What is that horrible wrinkle across the back? I think that my waist is higher in the back than it is in the front, also, there is a big difference between my waist measurement and my body measurement 2” down, there was simply not enough fabric to go around, so it went up to relieve the strain, hence the wrinkle. I wore the corset several times for a couple of hours a piece, over time a wrinkle began to be set into the fabric, so I could tell exactly where the stress point ended. Then I decided to cut some slashes in the back to create tabs, I cut the ones in the middle first and then tried it on again, the wrinkle was still there, although greatly diminished, so I cut two more, one on each side and tried it on again. Now, the wrinkle is gone!! Yay! I still need to bind the new edges with seam binding, but it really fits so much better now all around, and is significantly more comfortable on my lower back too. 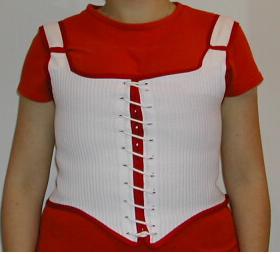 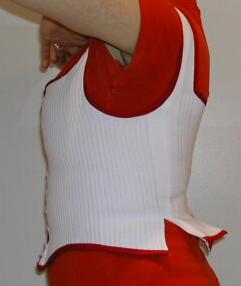 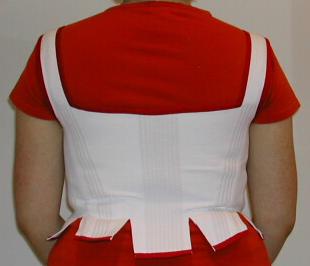 Finally, Here are pictures of the finished corset and hemd. Isn’t the red binding pretty? I put the binding on the inside of the slits on by hand, it went a lot faster than I thought it would and I plan to do all the binding on my next corset all by hand. You can really navigate the tight spots better that way.

Next time I make a hemd, I think I am going to make the back neckline lower. 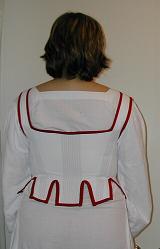