You are here: Home / Diaries / A Schlappe in the Military or Landsknecht style

The Schlappe is a type of Barett from the southern Germanic lands in the time of 16th century. The name of the cap, Schlappe, is derived from the Middle High German word “slappe” and means a “bag shaped headcovering with flaps” (Zander-Seidel, p.129-137). The ear flaps and the back neck piece are the distinguishing characteristic between the Schlappe and the Barett

It was primarily a man’s cap, but could be worn by women as well. There were several distinct styles for civilian and military usage; I have chosen to make a Schlappe in the slashed style most commonly seen on Landsknecht. While there are civilian pictorial depictions of Schlappe that are slashed, they are lined with fur. In the Schlappe seen on Landsknechts in woodcuts, they do not appear to be lined as it is possible to see inside the loops of the slashes, which you cannot do on the civilian ones.

While there is one extant knitted Schlappe in the Germanische National Museum, the ones that are recorded in the inventory records in Textiler Hausrat are most definitely made out of cloth, with wool being the most common in trading inventories and velvet as the most valuable and more likely to be passed down in wills.

Materials and Methods I Used

I chose to make this Schlappe out of wool flannel fabric as I felt that it would be easier and quicker to produce on the march with an army than a knitted cap. The color red was chosen as that is the color of the two color images I was able to find, there is inventory evidence of it being a common color and I had the fabric in my stash.

This Schlappe is made out of a 100% wool flannel that was fulled in my washing machine and dryer. I ran it through a heavy agitation warm/cold wash twice and rinsed it three times to get all the soap out. I then dried it on medium heat. The crown is lined in a white linen fabric.

The pattern for the Schlappe was developed from a four piece crown pattern that I made. After 12 mockups I finally arrived at the look I was trying for. The main hat pieces were sewn by machine, but all finish work was done by hand and there is no visible machine stitching. 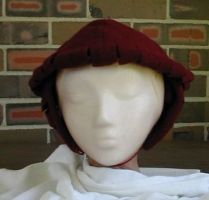 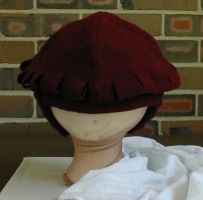 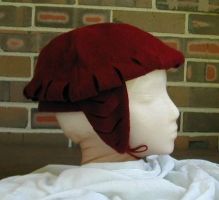 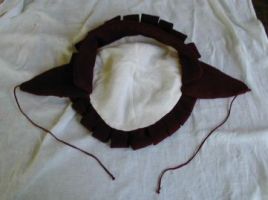 After making this one, and several more, I realized that the earflaps were not a separate piece from the neckband. So I changed the design slightly and now the earflaps are in one piece with the neckband. Its hard to see from the pictures that there is any difference, but I think the fit is changed slightly for the better. 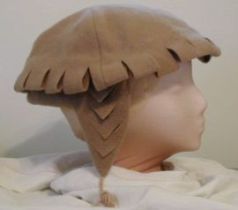 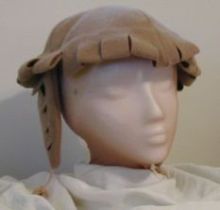