You are here: Home / Diaries / Diary of A Schaube or Husecke

A Schaube (another word for it is Husecke) is an overcoat of sorts, usually depicted as fur lined and worn by respectable persons looking snug and warm in portraits. Since it is typically worn by men in portraiture, its not usually thought of as a woman’s garment, yet women did wear them and they appear quite frequently in wills of the time in all classes in Nuremberg.

I decided to make one in the winter of 2003, and bought the fur for it. Unfortunately, life intervened and it has been sitting in a box waiting for me to have time. Finally, I’ve been able to find time to make it.

Here are several pictures of women wearing Schauben that were the inspiration for this project. The pictures will open into new windows. See bibliography at end for complete reference.

1- Burger’s wife from Augsburg in a Schaube, 1520-1530’s – This burger’s wife is wearing a yellow Schaube with a white fur lining and trimmed with black stripes, probably velvet. From the Augsburger Monatsbilder site.

2- Portrait of an Elderly Woman of the Ruess Family by Wolf Huber, 1534 or 1524 This elderly lady is snuggled up nice and warm in her moire silk Schaube with soft fur lining. I especially like how she is using the sleeves as a muff. Notice that the sleeve slashes are running horizontal instead of vertical. From Early German Painting, pg. 261

3- Portrait of a Woman aged Fifty-Seven by Hans Muelich, 1539 Another elderly lady in a Schaube, but this time with a silk lining, trimmed in black velvet? The outer fabric doesn’t look to be velvet as a similar fine piping of velvet can be seen on the horizontal sleeve slashes. From Early German Painting, pg.335

4- Nurnberger Patrizen mit Husecke und Barret by Jost Amman, 1577 In this engraving by Jost Amman originally published in Hans Weigel’s Trachtbuch, we finally get a good view of the back of a Schaube, only by this time the name of the women’s garment has evolved to Husecke. Even though its a good 50 years later than the Augsburg Schaube the basic style hasn’t changed, just some of the trimmings. From Textiler Hausrat, pg. 87

5- Praying lady in a Schaube by either Hans Suss von Kulmbachs or Hans Leonhard Schaufeleins. 1510-1520 A good side view of a Schaube and the sleeve detailing, as well as a good indication of how much fabric to put into the body of the garment. From Die Zeichnungen, plate #72

The outer fabric is a lovely dark red 100% wool twill purchased from Fabric.com . Its a nice medium weight fabric and has a beautiful hand. The lining is a soft yellow linen/cotton blend. The fur is a dark brown beaver fur from an old coat I got off of eBay.

The Pattern – Or why you should think before you cut things out – or Marion lets her scissors get ahead of her brain, once again.

Of course I can’t buy a pattern for this garment, so I get to draft one! Unfortunately, I didn’t evaluate the original sources well enough and came up with an incorrect interpretation, but more on that later….

From the artwork I could tell the following:

To draft my pattern, I created a basic body block for front and back, each on their own large piece of paper. I then modified the blocks based on the instructions in Pattern Design for Children’s Clothes by Gloria Mortimer-Dunn, for modifying a basic body block to create an overcoat.

For the front, I made the following changes:

For the back, I made the following changes:

I ended up with a pattern that looked like this drawing.

Here it is, the lining sewn as a mockup. You notice that the sleeves hang a little off in the back. They aren’t cut on the straight of grain to save fabric, picked that up from Alcega. 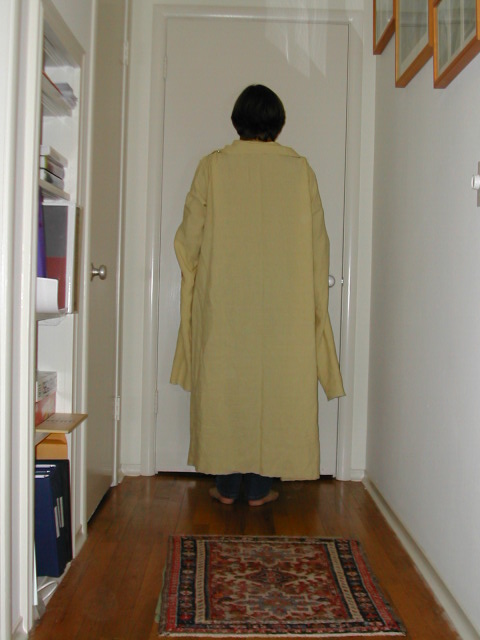 What is hard to see in those images, and is better shown in this picture, is the wrong-ness of the collar. It doesn’t lay right against the shoulders. It puckers at the shoulder blades and as it folds around the neck. It just is not the same kind of lapel treatment that the women in the pictures have.

A Little Fun with Tea

So, instead of fixing this right then…. I decided that I would re-draft the collar later and instead work on dying the yellow to be a little nicer shade of amber brown that wouldn’t clash so much with the red. I chose to use Orange Pekoe tea for this, and below are the results of my experiments. (Note: this is a completely non-period method for dying fabric!)

I used a ratio of 3 ounces fabric to 1 ounce tea bags. The water was brought to a boil, the tea bags were dropped into the water, and the water and tea were boiled for 15 minutes. The tea bags were then removed and the wet fabric was added. Water was added to cover the fabric and then it was brought back up to a boil for 5 minutes and then turned off. I pulled pieces out and rinsed them at timed intervals so I could re-create the color.

It’s unfortunate that the scanner doesn’t pick up the different shades of brown that resulted, but there is a big difference between 1 and 6. I decided that #2 looked best with the red wool and proceeded to dye the yellow lining fabric a nice brownish tan color.

Now I still hadn’t fixed the collar problem, but that didn’t keep me from cutting out the red wool outer fabric, since I figured it was *just* a collar problem, not a larger problem with the shape of the front neckline.

Once I had the outer fabric cut, then I go out the art books and started pouring through different pictures, looking at collar treatments 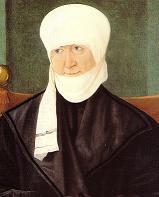 The last one is what made the lights turn on in my head. Instead of the Schaube being fur lined, it’s silk lined, thus if there was a join between the curved neckline and the collar, we should see a seam. Except there is no seam, thus, the lapels aren’t formed by the collar coming down around the shoulder, but by the front and back necklines not being shaped in a regular fashion.

So I carefully pieced the necklines to add the piece back in that shouldn’t have been cut away and the new pattern pieces look like this. 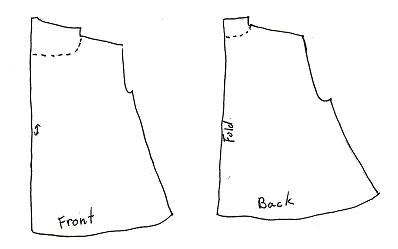 I finally got the diary of this project up! The current status of the Schaube stands at lining is sewn together and outer fabric is sewn together, but they aren’t sewn to each other. The sleeves also need to be assembled and trimmed, or trimmed with velvet and then assembled… that’s a project for this weekend. The end of the school quarter is in sight!

I finally finished it in 2005 and its been used quite a bit. I find that I’m not 100% satisfied with the lay of the shoulders and the way that the weight is distributed across the back.