You are here: Home / Diaries / The Orange and Black Dress from Augsburg

After wearing the Enn’s dress to two events where the temperature was around 100 degrees, I decided that I really needed something cooler if I was going to go to anything during the summer time. This turned out to be a wise decision as we had one of the warmest summers on record for Seattle in 2003 and I had lots of chances to wear this new very cool linen dress. 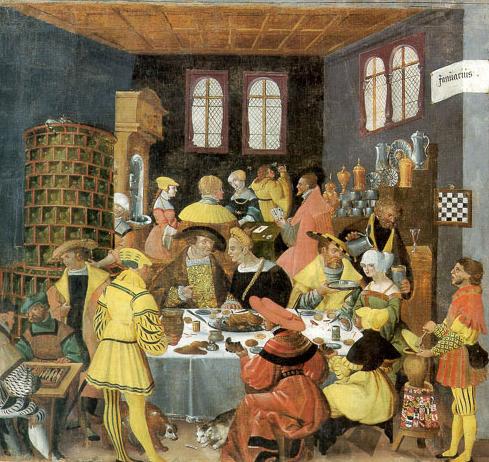 The dress was inspired by the green dress with brown guards in the lower right hand side of the above painting from Die Augsburger Monatsbilder and the color scheme of orange and black was inspired by the lady in the front right and the serving woman in the back left, peeking around the pillar by the door.

Die Augsburger Monatsbilder is a set of 4 murals done in Augsburg, Germany in the 1520’s. There is a mural for each season, and each mural depicts three months out of the year, depicting activities done in each month. These murals give a glimpse of the clothing and hats worn by a wide spectrum of social classes in Augsburg. Here is Winter,Spring,Summer, Fall. . The whole thing is luscious eye candy, worthy of drooling over and going in for the close ups.

For the coolness factor, I chose linen for this dress. Fortunately for me, Fabric-store.com had 5.3 oz linen on sale in exactly the colors I needed for this dress so I was set! The dress is completely made out of linen, including the interlining of the bodice and the guard fabric.

I used the bodice from the Enn’s gown that I already had, but made up a new toile and fit it to my figure over a tank top with a shelf bra, as I wanted this dress to be self supporting and not need a corset. Here are pictures of the fitting process. You can see the darts that are pinned in from the armhole and the take up at the shoulders that was needed . After I had the bodice pretty wrinkle free, I marked with a washable pen on both sides of the pin lines down the front of the bodice and also the tops and bottoms of the darts, and the pin lines on the shoulders.

Then I carefully unpinned the front and the shoulders and ironed the fronts flat, then I traced around the new front with the pinned in dart . This gave me a front bodice shape that had the gappage at the armhole removed without having to have a dart in the dress. Pretty sneaky uh? 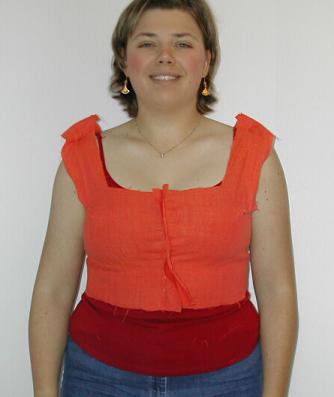 Once I had the bodice fitted, the rest of the dress was pretty easy

To draft the sleeves I referenced the sleeves on diagram 48, Gown worn by Pfalzgrafin Dorothea Sabina von Neuburg in “Patterns of Fashion” by Janet Arnold. This gave me a starting point as to how wide the sleeves should be and the depth of the curve at the top of the sleeve head. Once I had the general shape, I made a mock up with my arm length and took out the excess in the back of the upper arm and smoothed out the line from the armhole to the wrist. The buttons, which you can’t really see, are felted wool balls made from scraps and the buttonholes were done by hand.

From the painting above, we can see the skirt was quite full and seems to have the fullness around the hips that one would expect of a pleated skirt. From other paintings done in the same time period and area, which show better details, we know that pleated skirts were the normal type of skirt worn. Since the skirt in the mural is painted without details, it is hard to determine the pattern of pleats in the skirt, so I used a woodcut from about 50 years later to see how the pleating might have been done. I chose to use this pattern of a knife pleat that starts in the center front and radiates towards the back where the pleat pattern joins. I also made the skirts shorter, just like this milk maid on the right, for easy walking and less tripage over the hem.

Bride from Frankfurt and a Maid from Nurnburg 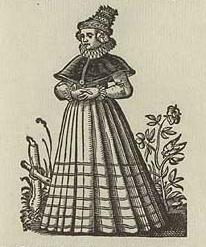 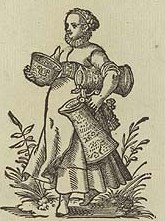 The skirt and the bodice were finished separately and the finished edges where whip-stitched together. This makes for a very nice finish on the inside and outside of the waist. The sleeves were also finished separately and whip-stitched into the armholes. Next time I will probably sew then into the armholes and lay a strip of straight grain fabric to cover over the raw edges, which is a more period finish for the arm scythe seam.

The pattern of the black guards on the skirt was taken from this picture from Im Frauenzimmer of a young girl from Augsburg. The guards themselves are made out of strips of black linen, cut on the straight and sewn to the skirt. Next time I will sew them into the skirt instead of on top of, as the linen has puckered underneath the guard, and the guard has too, but in a different way. No way to iron it flat either. *sigh* 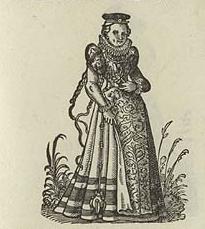 The finished dress, front, side and back (the stripes really are even, its just the ground that causes the slant), and finally with the proper accessories, an apron and a basket. The last picture really shows the true orange of the dress.

Previous Post: « A Schlappe in the Military or Landsknecht style
Next Post: Diary of A Schaube or Husecke »