You are here: Home / Diaries / The story of the Two Hemds (Chemise)

One would think that something so simple would be hard to mess up. Welcome to my diary of the Hemd, its actually two stories, the first is the disaster, the second is the slightly more happy ending one. I still am not 100% happy with the end product, but if I kept re-making it until I was, I would never get to the dress. So I have decided that this is good enough to wear and move on to the next part.

The word Hemd means shirt and is a general term used for both men’s and women’s clothing, a white linen garment worn under other clothing. There are lots of variations of the word, which I am not very clear on yet, so I am just going for the basic word, Hemd.

Hemd #1 or Why you should really think about what your doing and try it on for a fitting before you spend hours embroidering it.

I decided to start this gown from the skin out, build the foundations first and correctly and then the gown will at least have a fighting chance of fitting the way it should. Since I knew nothing about making a chemise, I went to Drea’s site, put in my measurements and used her smock pattern generator to generate the pattern.

The program worked fine and gave great directions, but the fit was not what I was going for. I like the top of the sleeve to be right at the edge of my shoulder, not 3-4 inches down my arm. Of course I didn’t find this out until after I had the whole thing sewn together, had put on a collar with a ruff, and spent a long time doing machine blackwork embroidery on it. I also managed to make a few mistakes in sewing it together (like sewing the sleeve on wrong side out, even worse I had already done the seam finishing treatment!), which of course meant lots of ripped and re-sewn seams, so by the time I actually got it put together right and was able to try it on, AND then discovered that the stinking stupid sleeves and shoulders didn’t fit right. Well, I ripped it off and threw it across the room, uttered a few choice words and then consigned it to exile, stuffed it in a plastic bag in the basement. 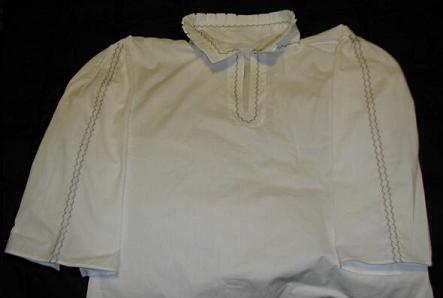 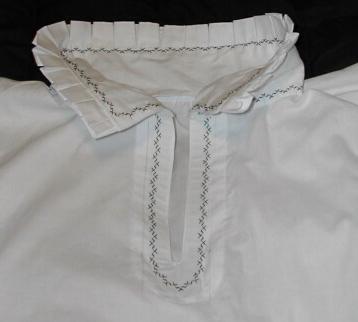 Measurements of the Fabric

Lesson’s learned from this one:

After I got stuck on the corset with those darn wrinkles in the back, I decided it was time to think about making another Hemd, plus I was sick in bed for a whole week with an awful case of the flu and needed a project.I decided to use the 5 yard piece of 60″ wide 4.3 oz white linen that I had purchased from Fabrics-store.com, its such a lovely weight and not quite see-through.

I took my shoulder width measurement and added an inch for seams, and made body panel that wide, 18 inches. I knew that I would need to add more fabric to the sides to make up the extra needed by the waist and my rear, but I wasn’t going to worry about that at this point. I also decided to make the finished length longer, increase the width and length of the sleeves so I would have a nice fullness and a little frill around the hand. I also increased the size of the under arm gussets, since I was bring the sleeve closer to the body and I wanted to add fabric to ensure ability to move. I did not increase the length of the side gussets the same amount as I did the body, I decided I wanted them go start down lower on the hip.

Measurements of the Fabric

I was able to rip the fabric into the proper width, but due to the weave had to cut the length sections. I love ripping fabric. I ripped out the 94″ long piece from the 5 yard piece and was able to make the entire Hemd from it, with just a little bit of scrap left.

I started with the neck finish first, I ironed the fabric and folded it in half length wise and ironed the fold, this gave me the center line. Then I used a pencil to mark that fold. I like using a mechanical pencil to mark light colored fabrics when I am sewing, it doesn’t rub out in handling but it washes out beautifully. Then I marked the center point on the width using a ruler.

I cut out this square on the pencil marks and then using some small scraps I had left over from ripping out the other pieces, I made a mitered 2″ wide frame for the neck and stitched it with a ¼” seam allowance, ironed the frame to the inside, folded up the bottom edge to make the hem and top stitched it in place from the front. This gives me a finished 9″ by 9″ square neck.

I decided I was going to use French seams for the seam finish, it gives a nice look and contains the fraying.

Next steps I took:

Now I needed to figure out how much extra I need to add into the sides to make up the extra width that I needed. So I sewed the sleeves from cuff to where the gusset joins the body, then I basted the rest in to the hem and tried it on.

It was a bit of a struggle to get it on since it was more than a little snug in the bust. Once I did get it on and things adjusted, I found that it did provide a good deal of support in the bust area, which is saying a bit since I am a 38D. It was quite tight around the hips and waist, so I pulled up the smock until I reached the gore in the side and kept pulling until I reached a point wide enough so that it was comfortable. I measured the gore at that point and decided that was the width that the side panel needed to be.

So, now I knew that I needed to add a 6″ side panel to each side up to the base of the armhole, but… How do I tie that into the gusset at the armhole? I can’t re-cut the body to include a arm scythe, which would have fixed the problem but I was feeling stubborn, and I knew that this could be solved without any re-work. and using rectangles, squares and triangles only. So, I cut a triangle and fitted it into the arm gusset, sewed the triangle to the side panel and sewed the side panel to the body and then to the side gores. I sewed the triangle seams to the gusset and where it and the side panel joined the body by hand since it had several sharp turns and I figured I could do it once by hand or 3 times by machine.

What you end up with under the arm is a 5 sided section that won’t lie flat, but fits the body wonderfully and is very comfortable to wear.

A detail shot of the under arm treatment 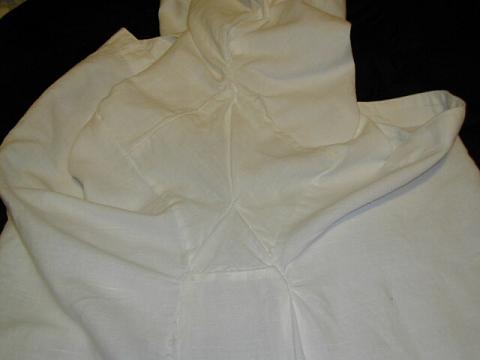 A detail shot of the side 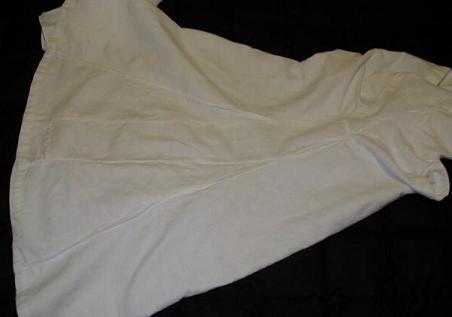 box pleated the cuffs using a 1/2″ mark, so the pleats are ¼” deep. Next time I will do the cuff treatment BEFORE I sew the side arm seams, much easier to do that way. The pleats looked a little plain after I got the second set done, so I tacked the two sides of the top pleat together so it’s a little more decorative. It was much crisper before I washed it.

Detail of the cuffs 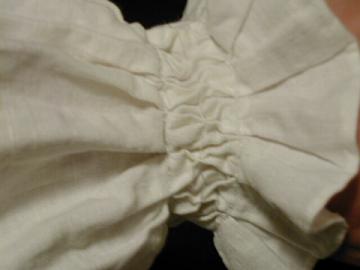 Not very good shot of the finished garment

I am very pleased with how this turned out, next time I will make sure that the French seams all happen on the inside of the garment not the outside like the ones joining the side gores to the body **sigh**, but at least they all match. Generally, I am happy enough with how it turned out to move on to the other parts of the dress.

After wearing this for about 6 months I can now say with a great deal of certainty, make sure you can roll up your chemise sleeves! These ruffled cuffs have been the biggest stain catcher ever, and when its a hot day outside, its so nice to be able to roll up your sleeves and cool off that way, impossible to do when you don’t leave an opening. The fabric has held up well and its been the nicest thing to wear on hot days, very absorbent and has a nice evaporative quality to it.